Painting with words writing with colours

Antonio Saliola was born in Bologna, town where he still lives and works, in 1939, under the sign of Libra.
During the Second World War he spent his childhood evacuated in the countryside. This world will forever live in his heart, as well as his beloved parents: “mamma” Natalia, a creative teacher from Modena, and “babbo” Donato, of strong Molisan origins.
After graduating from the School of Law, from 1967 to 1974, he worked as an Official for the Academy of Fine Arts of Bologna. During the same years he opened and directed Galleria Tempo.
After 1974 he decided to abandon his mandate to dedicate the rest of his life to painting, his real vocation.
He loves paintings, books, and movies, that help him keep writing the script of his own existence.
Since 1972 he has began a series of personal exhibitions inspired by a large variety of themes: family, backyards, gardens, interiors, … 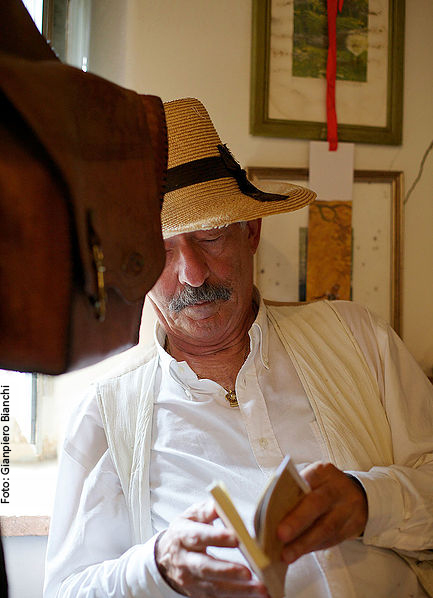 Critics, scholars, writers, and directors have shown their interest for his work and created with him projects based on their mutual friendship.
From 1998 he has packed his fairytale’s paintings and took them around the world exhibiting in Paris, Bruxelles, London, New York, Chicago, Buenos Aires, Hong Kong, Monte Carlo, …
He keeps living in his beloved town spending his summers in Romagna, at first in a farmhouse called Cagnotta, then, since 1992, in Montefeltro, in a lovely medieval village called Petrella Guidi where he managed to
create his personal soul’s healing place: not content of painting gardens, he created a real life garden called “Il Quasi Orto” using plants, flowers, stairs, and walls, instead of brushes and colors to help the guest walking through eight different “rooms”. It’s like a special pictorial work that constantly changes without an end: the dream of every artist.
Again and always therefore the idyll of gardens, to which he added dreamy interiors and old mysterious libraries. And, for some years now, paintings that are a fascinating re-working of the world of fairytales, without the prejudice to the suspicion that the real painting actually is his own life.